Back to overview of Speaking & Building 1-13

Choreopoetic - an anthology of choreographic texts 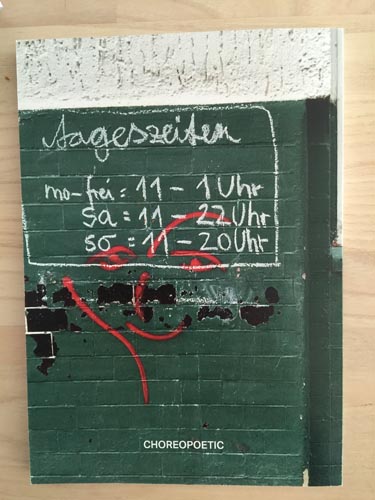 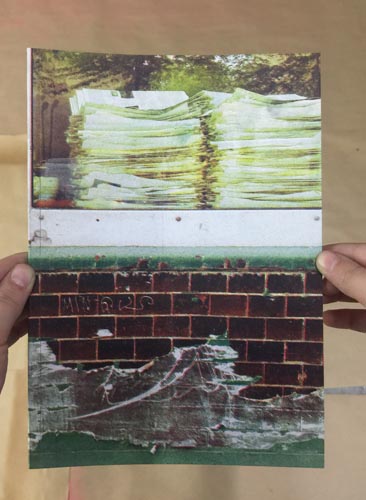 Extracts from the text Reciprocal movements, written by Melanie Fieldseth As a contribution to the publication Choreopoetic

In public spheres the conversation on art is formed by the art that is produced and performed and the discourse that develops from within and in response to artistic practice and production. Public platforms for discourse and reflection are necessary in the same way arenas and venues are necessary in order for art to meet an audience.

Public spheres are maintained through the exchange of ideas. Voices must be active and views must be shared if the conversation is to thrive. There needs to be a space or many spaces for these voices and views to be expressed and received by others. When media publishers cut their budgets, arts criticism is often one of the first areas to be hit. Even before the revenue crisis set in for full, few media outlets devoted much time and space to the exploration of timebased and performative forms of art. Specialized internet platforms and print journals play a decisive role in maintaining a meaningful, critical and indepth dialogue. But their resources are limited and they can’t cover everything.

Platforms and publications can provide visibility for the growing field of choreographic reflection. By bringing to light how text is produced through choreography, new knowledge can be formed and shared which can expand the understanding of choreographic practice. Text becomes a new space where choreographic approaches and reflections can comingle and form a new conversation on the choreographic. Writing can then be seen as an artistic act in which the choreographic is at once both produced and considered, in reciprocal movements that produce new public spheres.

Poetics or ‘a poetics’ is not simply a background or underlying structural aspect of a work, or a means of determining meaning, but a convergence of logics beyond ‘aboutness’ that provide the conditions for the emergence of a ‘something else’. 1

The publication Choreopoetic can be viewed as both a platform for exchange and a curated context for choreography. The format is both thought and thing, a work that seeks to open up a poetic, discursive space that offers opportunities to experiment with choreographic form and communication. Choreopoetic provides a space for – and profiles – choreographic voices that use writing and text as an integral part of their artistic activity and work orientation. The publication encourages reflection on how choreography can reach out beyond the purely temporal moment of the immediate event and carry across discourses, bodies, time and space.

Choreopoetic introduces fourteen prominent voices through the medium of choreographic texts – texts as works – written especially for this publication. What the contributors have in common is working in a variety media and formats, and that they all use writing and text alongside – and as part of – their choreographic practice. They are artists who explore the outer limits and boundaries of language – and the projection of language onto various media and materials, whether in the theatre, the gallery or the museum. They are artists who address the question of how reality exists in language and extends out into physical space.

“Choreography is developed through writing,” writes Melanie Fieldseth in her contribution “Reciprocal Movements”. In Choreopoetic the work of writing is presented as an artistic act and an extension of choreographic practice, in which the realms of process and work, bodily forms and written language can meet and be shared. I have invited artists who have influenced me in recent years, either through specific art practices, or as a result of their interest in discourses to which I myself relate. There are of course many other choreographers and dancers, primarily outside the Norwegian context, who could be relevant (in that they write) and who I have not approached in connection with this work.

1 Ric Allsopp: Some Notes on Poetics and Choreography , in Performance Research – A Journal of the Performing Arts. 2015

The texts in Choreopoetic are hybrids that span a range of genres: poetry, short prose, manifesto, essay, script, autobiographical sketches and documentation. Common to all the texts is that they can be read as choreographic works in their own right. Half of the contributions were conceived in Norwegian and thus serve to highlight a linguistic focus in the field of dance in Norway. Since most of the content is presented bilingually, this publication is accessible to both Scandinavian and English-reading audiences.

The contribution by Alexandra Pirici makes the highly relevant demand for poetic economies to be fetched in from the “alternative” fringe to the centre. She believes that they should penetrate everywhere, infiltrate and transform, challenge and take over the infrastructures that have been used to achieve completely different objectives. I would add – in unison with the performance theorist Jenn Joy – that to engage choreographically involves positioning oneself in relation to other people and inviting to invention and reorientation in relation to language, space, articulation, composition and ethics. 2

The textual focus in contemporary aesthetic practices has also carried over into the arts of dance and choreography. The term poetics is applied here to more than just the fields of established literary and dramatic forms; it is also a productive term in an expanded performance field, where it serves to articulate transdisciplinary and post-disciplinary issues. Here we are able to see what poetics can mean as a generative and productive term within the choreographic realm. The performance theorist Ric Allsopp has written about poetics as an extended concept, and it is my intention to highlight choreopoetics as a productive term for writing that opens the space for text and choreography.

From a point of view of performance practice, poetics concerns itself with ‘poiesis’, or acts of making and giving form to the interplay of material and immaterial content: a poetics of dance and choreography, of theatre and performance art, of writing and poetry , of architecture and painting. More than simply a method of classification and categorization, poetics thus looks towards and draws on a wide range of resources, intuitions and techniques. 3

Interaction as a form of collaboration and common pursuit:

These crossovers between poetry, text, curating and interactions round off my fellowship project. At the same time, this publication is forwardlooking. Ideas do not exist in isolation, but emerge from micro and macro processes to exist as links between and across the work of singular artists and collective platforms. Choreopoetic is an example of my ongoing interest in initiating projects that have individual outcomes within a collective context. This calls for a curatorial approach to composition, or more precisely the choreographing of contexts for dance and choreography. An emphasis on collectivity can give rise to a multifaceted space for exchange that challenges autonomy and work demarcation. Openings and extensions that occasionally create bridges across the invisible and insurmountable gap that separates thought from experience, the world from our conceptions of it. The publication stems from a preoccupation with the way artworks can speak through one another: about influence, reputation and crossfertilisation, and about contact across distance. Choreopoetic can be viewed as a kind of staged presentation of conversations and points of contact across a range of artistic productions and spatial constraints.